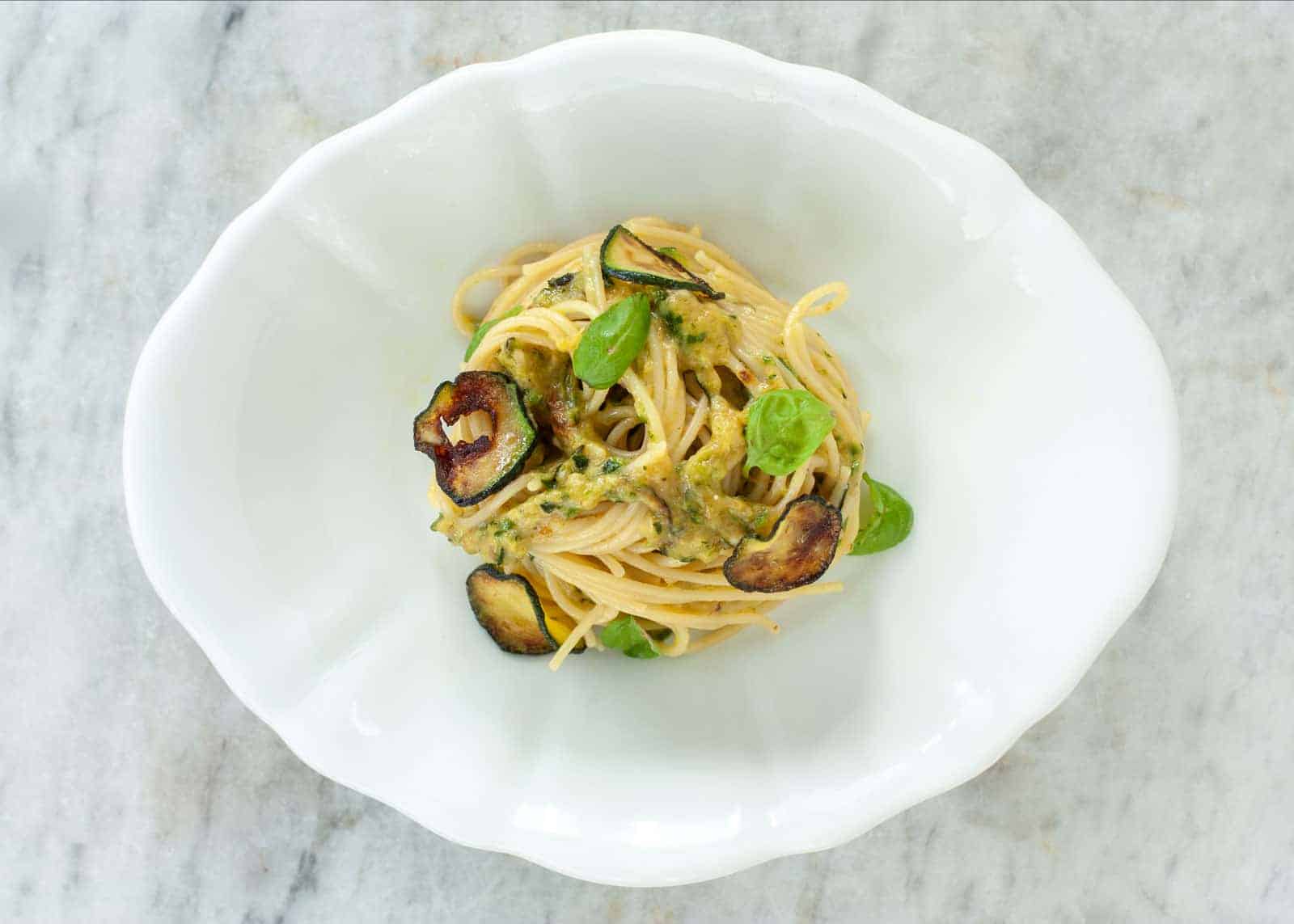 Don’t let first impressions fool you! Spaghetti alla Nerano is not just a dish of ordinary spaghetti with courgettes. The provolone (a cheese originating in Casilli near Vesuvius, where it is still produced in pear, sausage or cone shapes, 10 to 15 cm long) gives them an irresistible creamy-sweet note. Such a recipe can, of course, not remain a secret.

We find ourselves in the 1950s. In her small restaurant in the bay of Nerano, Maria Grazia served her guests spaghetti with courgettes. But she did not prepare the pasta with pecorino, as was customary in Campania, but with provolone del Monaco: a semi-hard cheese made from fresh cow’s milk, typical for the Sorrento area. The cheese made the spaghetti heavenly creamy. Word spread. And nobody dared to call them spaghetti alle zucchine anymore. The name would be too common for such a culinary experience.

The area of Naples, especially the mountains in the hinterland, has been a centre of provolone production since the 18th century. The origin of this mild cheese made from cow’s milk, which is mostly pear-shaped, is attributed to shepherds from Agerola. When the shepherds and farmers brought their cheese to the town for sale, they protected themselves from the weather and the cold with heavy, dark coats. In these clothes they looked like monks. Their cheese soon became known as the cheese del Monaco, of the monk

The recipe is very simple. But for the optimal taste, you should consider a few things. Larger courgettes often have a bitter aftertaste, which can affect the desired sweetness of the dish. Therefore choose small courgettes. It is best to taste them before you start preparing them. In some recipes the courgettes are breaded before frying: an attempt to combine marinated courgettes in the Neapolitan style with spaghetti alla Nerano. But purists fry without breading – and only with the best olive oil. 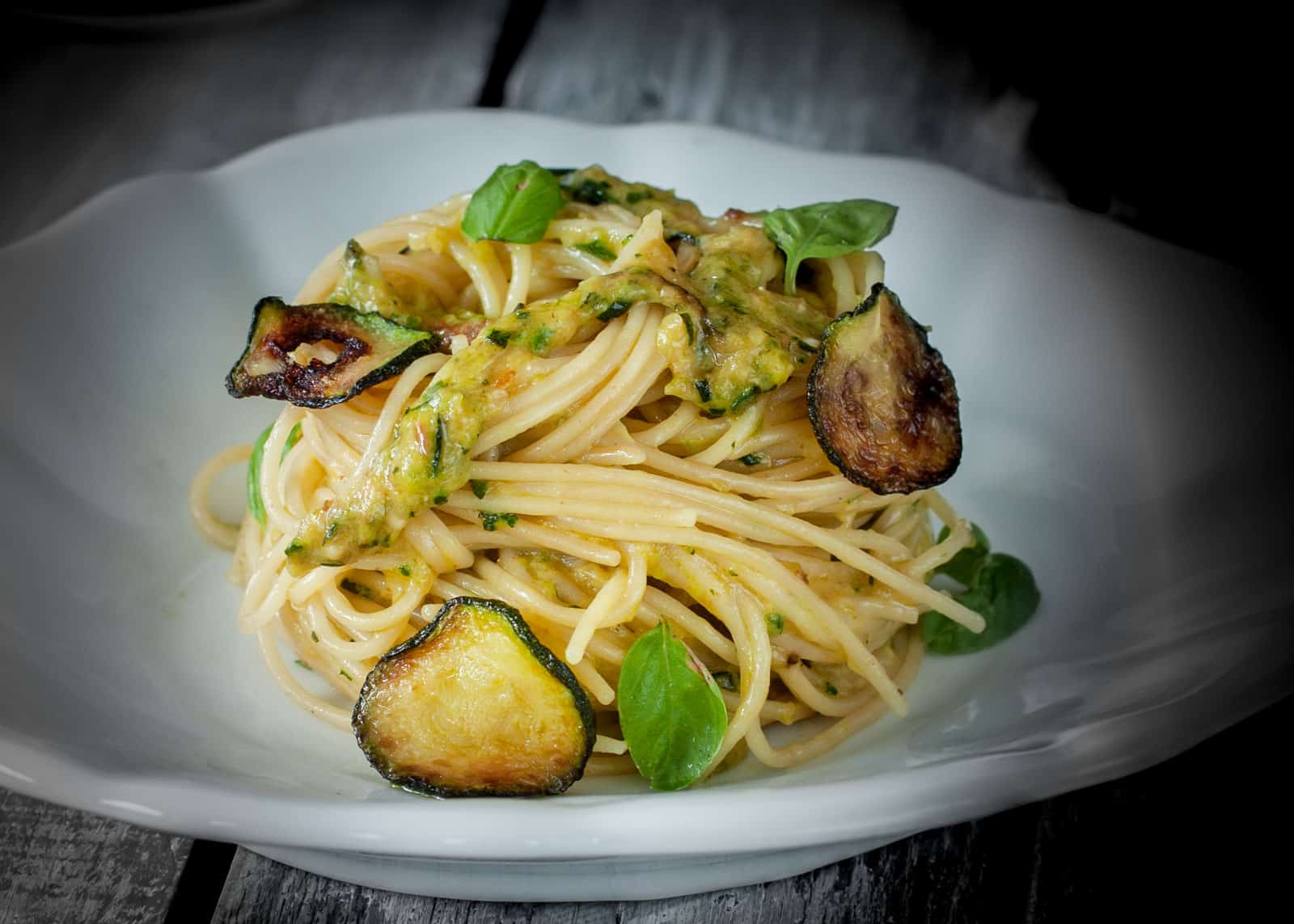 Such a creamy soup with chestnuts and lentils will not only warm your stomach and your soul. In Italy we also firmly believe that it brings us luck. Especially if it's made with the right

The people of Naples love fish and seafood in all variations. Especially in the cooler seasons also mussels have high season. For example as mussel soup, a culinary classic with a royal

This is what summer should taste like: the simple tart with baked tomatoes and buffalo mozzarella is enhanced by herbs such as marjoram and thyme. Whether from the garden or from the pot on your

Chicken, lemons, salt and pepper - that's all it takes for a delicious and juicy roast chicken. The chicken is in the oven in no time, leaving you time for an espresso or aperitif. But don't forget:

According to an old saying in Italy, if you go to Lucca and don’t try buccellato, this sweet Tuscan cake, you haven't been to Lucca at all. In Tuscany, there are very special stories surrounding the

In Italy, pollo al latte is a very popular dish amongst mothers as it is so easy and quick to make. And children love it because it tastes so delicious. Our home was no exception. Quick and easy