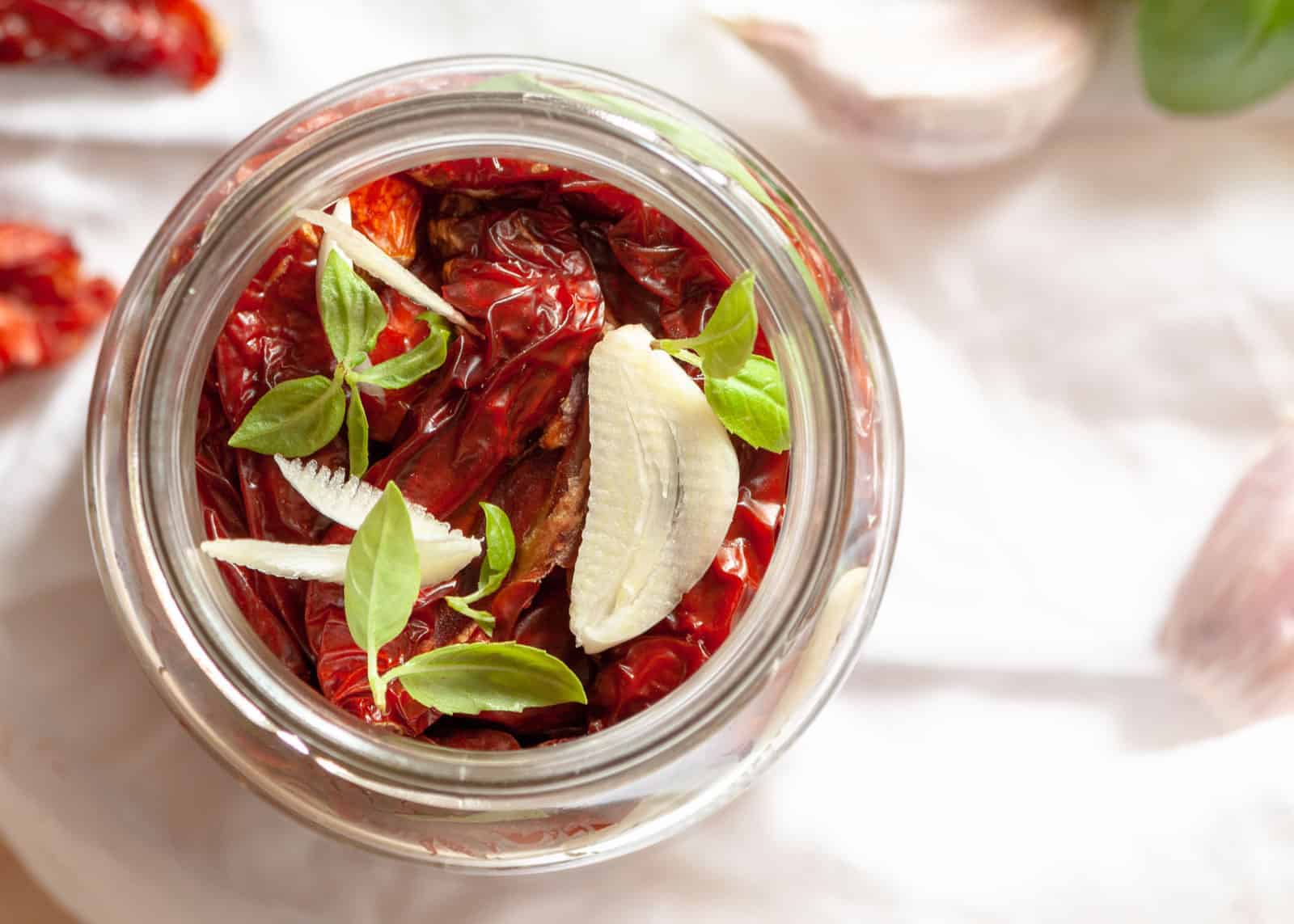 Dried pickled tomatoes taste like the essence of summer: intense and sweet-tangy. Pickled with olive oil, garlic and herbs, they give pasta, bruschetta or grilled vegetables a unique flavour.

Sicily, the region where tomatoes are fragrant

From June to August, the streets of the Sicilian villages used to be coloured in red. On the pavement, on the windowsills, in the courtyards; tomatoes cut in half were placed on scannatura, wide wooden boards, everywhere. They dried under the hot sun and in the warm wind, and their strong fragrance filled the streets and alleys.

Only a few Sicilian families maintained the peasant tradition of drying tomatoes themselves. The nonne was usually responsible for this. Even nonna Maria, the grandmother of a friend of mine, whom I always used to visit in summer, took care of the tomatoes: sugo di pomodoro, which she cooked with a potato until it was really creamy (due to the potato starch), and, of course, the dried pickled tomatoes.

For 100 g of dried tomatoes, you need 1kg of fresh tomatoes. And it takes seven days to dry the halved tomatoes in the sun and air. They were carried into the house overnight to protect them from any humidity. Nets kept hungry insects at bay. Grandma Maria always lightly salted her dried tomatoes. They tasted like summer by the sea.

Those who do not live in southern hot regions have to dry their tomatoes in the oven: place the halved tomatoes, skin side down, on a wire rack place. Dry for about 12 hours at 75° C (fan oven), and turn every 3 hours. Small cherry or cocktail tomatoes dry faster. If your oven does not have a drying function, the oven door must be left open to allow moisture to escape.
Dried tomatoes are either attached to string and stored in a cool and dry place or preserved in oil.

If you like it spicy, you can also add whole or finely ground chillies. Or you can combine the tomatoes extravagantly with sour-salty capers, which are pickled with the tomatoes. You should definitely try pasta with capuliato: the deep red Sicilian pesto consists of pickled, dried tomatoes, basil, garlic, olive oil and a fresh chilli pepper.