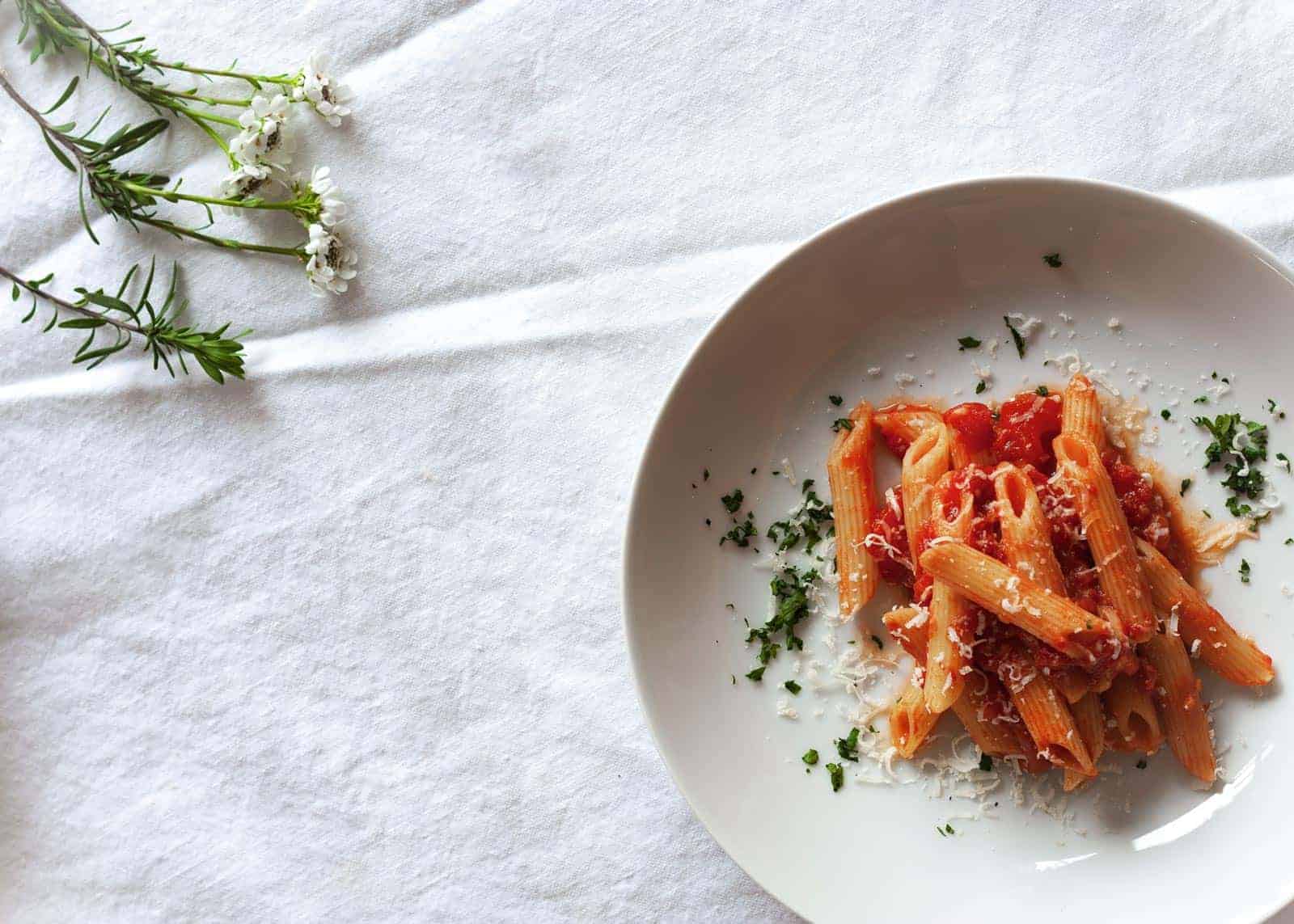 This recipe is so simple that you will be more than surprised with the final result. Those of you who like spicy food will love pasta arrabiata with its chilli, garlic and tomatoes. This dish will make the blood in your veins flow that little bit faster, while also turning faces still pale from the winter a lovely shade of pink.

The arrabiata sauce is a Roman speciality and is one of the most famous dishes in Italy. Arrabbiato actually means “annoyed” – I’m sure you are wondering about the origin of this spicy dish. Let me try and explain: if a cook uses too much chilli, you will sit at the table with a red face, with tears in your eyes and an open mouth – as if you were really annoyed. Since everyone prefers a different amount of spiciness, if you are in a restaurant, talk to your waiter who will help you. Also, it can be helpful to experiment at home to find out how much chilli you like.

In theory, you can prepare arrabbiata with any type of pasta. But, in general, only short types of pasta, in which the sauce can gather easily, are acceptable. Connoisseurs prepare the arrabiata exclusively with penne rigate. You should avoid using onions, as their taste is too intense. Also, only use garlic to add some aroma to the sauce: crush the garlic, briefly fry it in oil and then remove it again. The tomatoes should either be fresh and sun-ripened or – perhaps better in our latitudes – pelati from the tin. But make sure the chilli pepper is fresh, dried chillies change their flavour.

From Northern Italy to Calabria

Nowadays, pasta arrabiata is often served with Parmesan in northern Italy, but for the Roman original, Pecorino Romano is essential. Only Pecorino Romano can harmonise perfectly with the spiciness of the chilli as well as the taste of the sauce. Roman tradition enriches the pasta by adding a handful of chopped parsley and a shot of olive oil. In the arrabiata sauce from Calabria, two anchovy fillets, finely sliced green and black olives as well as capers are added. Purists may turn up their nose at this – but my family loves this slightly salty variation.

If the chili is a little too spicy, don't worry - there are effective ways to deal with this. First, don't drink water! This will just spread the capsaicin of the chilli pepper, which is responsible for the “hot” sensation. The fat in milk, cream or yoghurt, for example in sweet milk dishes like panna cotta or tiramisu, can work wonders. Cheese also has a soothing effect as the milk fat binds the capsaicin of the chilli. So when you're preparing penne arrabiata, you might as well think of a suitable dessert! 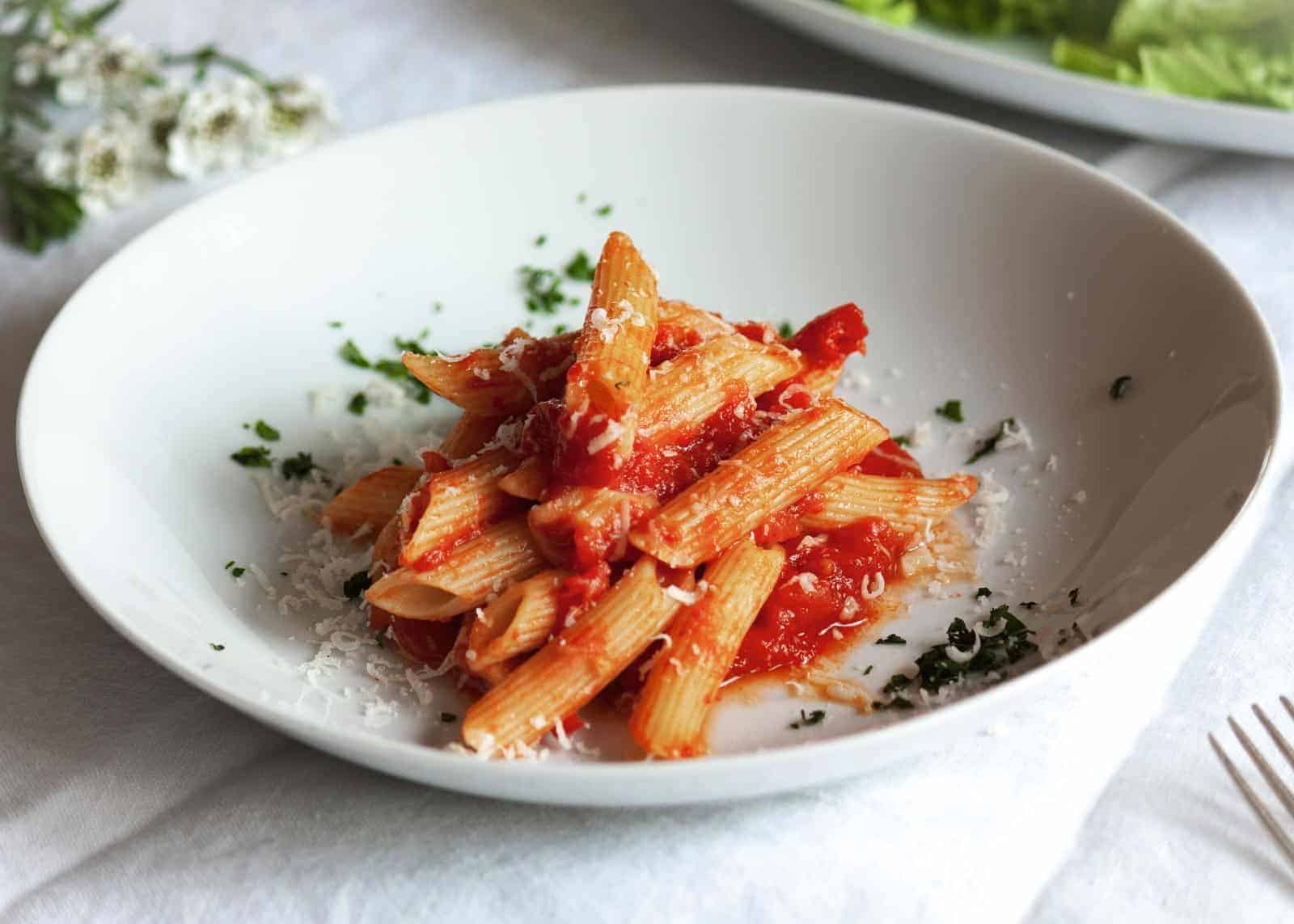 Simplicity can be so wonderful, and the Piedmontese cuisine fully embraces this art. It also applies to chicken Marengo, which is said to have gotten

Potatoes, cheese, breadcrumbs. Sometimes that's all it takes to be happy. Lasagne di patate was my grandmother's favourite dish, and even we children

Spring is here! I like to celebrate it with homemade ravioli - filled with fresh spinach and ricotta. In Liguria, spinach ravioli alla genovese is a

Lasagna is a classic of Italian cuisine. In this dish, the lasagna sheets cooked in hot salted water are arranged in layers separated by a filling.

In Italy you will find a focaccia recipe in every bakery. In Genoa it can be found in every household. It is served on every occasion with fresh milk

When my grandmother cooked rabbits, we knew there was a special occasion to celebrate. Her rabbit was not roasted, but braised in its own juice and

The best Italian recipes & stories directly in your mailbox !